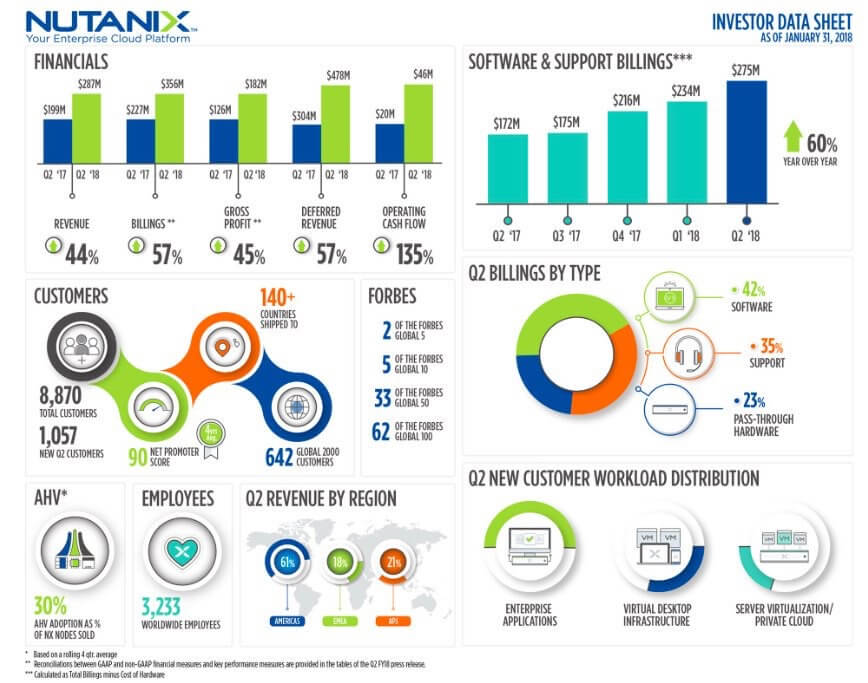 “We had an outstanding quarter that demonstrated our strong execution across many business initiatives. Our shift toward a software-centric strategy is on track and we aligned our sales compensation in February to support this transition,” said Dheeraj Pandey, Chairman, Founder and CEO of Nutanix. “Our continued success with Global 2000 customers, the strength of our large deal execution and record number of new customers prove that we are reducing friction for our customers and providing them with a consumer-grade experience that is unmatched.”

“We are proud of our performance in Q2. During the quarter, we saw record results across all geographies, with particularly strong performances from our EMEA and APJ regions. Our 57% billings growth year-over-year and our 45% increase in non-GAAP gross profit year-over-year drove a better than expected bottom line,” said Duston Williams, CFO of Nutanix. “Our software and support billings also rose significantly during the quarter, demonstrating our progress as we transition to a software-centric business model. Our strong execution on our strategic initiatives, together with our successful convertible debt offering, put us in a strong position for the future.”

For the third quarter of fiscal 2018, Nutanix expects:

Supplementary materials to this earnings release, including the company’s second quarter fiscal 2018 investor presentation, can be found at https://ir.nutanix.com/company/financial/.

1 Gartner does not endorse any vendor, product or service depicted in its research publications, and does not advise technology users to select only those vendors with the highest ratings or other designation. Gartner research publications consist of the opinions of Gartner’s research organization and should not be construed as statements of fact. Gartner disclaims all warranties, expressed or implied, with respect to this research, including any warranties of merchantability or fitness for a particular purpose.

All forward-looking non-GAAP financial measures contained in this section titled “Q3 Fiscal 2018 Financial Outlook” exclude stock-based compensation expense and amortization of intangible assets and may also exclude, as applicable, other special items. The company has not reconciled guidance for non-GAAP gross margin and non-GAAP loss per share to their most directly comparable GAAP measures because such items that impact these measures are not within its control and are subject to constant change. While the actual amounts of such items will have a significant impact on the company’s non-GAAP gross margin and non-GAAP loss per share, a reconciliation of the non-GAAP financial measure guidance to the corresponding GAAP measures is not available without unreasonable effort.

Nutanix executives will discuss the company’s fiscal second quarter financial results on a conference call at 4:30 p.m. Eastern time/1:30 p.m. Pacific time today. To listen to the call via telephone, dial 1-833-227-5841 in the United States or 1-647-689-4068 from outside the United States. The conference ID is 1984527. This call will be webcast live and available to all interested parties on our Investor Relations website at ir.nutanix.com. Shortly after the conclusion of the conference call, a replay of the audio webcast will be available on the Nutanix Investor Relations website. A telephonic replay will be available for one week following the conference call at 1-800-585-8367 or 1-416-621-4642, conference ID 1984527.

The Company adopted ASC 606, the new standard related to revenue recognition effective August 1, 2017. Prior period information has been adjusted to reflect the adoption of this new standard.