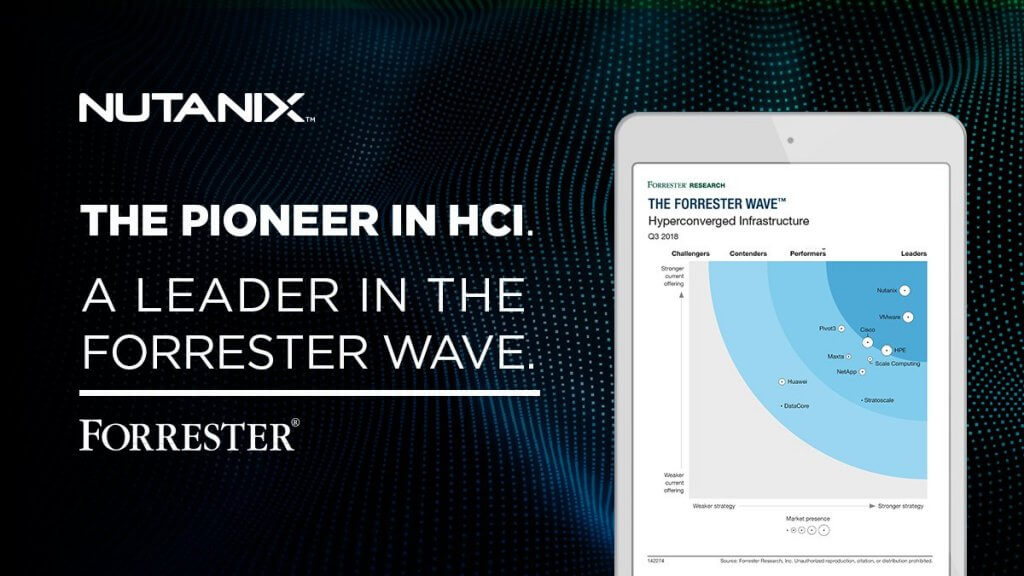 Nutanix, Inc. has announced that it has been named as a leader in “The Forrester Wave: Hyperconverged Infrastructure, Q3 2018,” published by Forrester Research, Inc.

The report evaluated 11 vendors on Strategy, Market Presence and Current Offering, and Nutanix was positioned as a leader. Nutanix believes that these results, combined with its history of high rankings in analyst research, further solidifies its place as a continued market leader across enterprise cloud and hyperconverged infrastructure.

“We believe our position as a leader is a result of our strong product offering and commitment to providing our customers with the freedom they need to build their infrastructure and choose their cloud provider on their terms,” said Dheeraj Pandey, Chairman, Founder and CEO of Nutanix. “We couldn’t agree more with the Forrester report, which states that ‘hyperconvergence has evolved rapidly to reach the mainstream.  Flexible, integrated compute and storage infrastructure is central to a firm’s ability to do business in a marketplace with changing customer expectations.’ We are seeing enterprises of all industries embracing our solution, and we are proud to be a leader. We’ll continue to be hyper-focused on our customers, to enable their success and support their missions.”

The Forrester report shows that “Nutanix has maintained its position atop the HCI market with its innovation, R&D investment, strong sales momentum, partnerships, and acquisition of new customers from all segments and geographies.” Acquiring technology vendors like Calm, Minjar and Netsil earlier this year has enabled the company to attract new buyers.

The report further states, “[Nutanix] switched from solely offering an appliance to a solution with a software-only stack for certified hardware platforms, a strategy that has delivered results…. Nutanix has a clear, impressive road map for its product lines.”

For a complimentary copy of the Forrester Wave for Hyperconverged Infrastructure, please visit: https://www.nutanix.com/go/forrester-wave-2018.php.