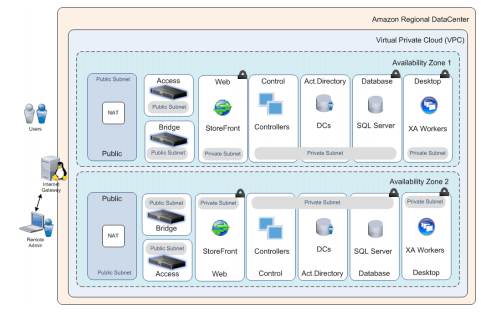 Amazon Web Services (AWS) provides a complete set of services and tools for deploying Windows workloads and NetScaler VPX technology, making it a perfect ﬁt for deploying or extending a Citrix XenApp farm, on its highly reliable and secure cloud infrastructure platform. This white paper discusses general concepts regarding how to use these services and provides detailed technical guidance on how to conﬁgure, deploy, and run a XenApp farm on AWS. The white paper illustrates reference architecture for the two most common Citrix XenApp deployment scenarios and discusses their network, security, and deployment conﬁgurations so you can run XenApp workloads in the cloud with conﬁdence. This white paper is targeted to IT infrastructure decision-makers and administrators. After reading it, you should understand the requirements to set up and deploy the components of a typical XenApp farm on AWS. Included in the discussion are the artifacts to use and how to conﬁgure the various infrastructure details, such as compute instances, storage, security, and networking.

XenApp Reference Architecture and scenarios
To understand how XenApp and associated components can be hosted on AWS and connected to an existing on-premises deployment, let’s ﬁrst review the architecture and components of a typical XenApp server farm and explore the common scenarios and topologies.

XenApp Farm Reference Architecture
Citrix provides considerable guidance for architecting XenApp farm topologies for many scenarios and scales. This document reviews the typical XenApp farm architecture as recommended by Citrix and identiﬁes a couple of common deployment scenarios and associated topologies that we will map onto AWS later…

XenApp has evolved over several versions to provide a rich set of capabilities and services for application and hosted shared desktop delivery. XenApp architecture has also evolved to support a service-based architecture, enabling speciﬁc services or application sets to be scaled out to individual servers and worker groups. In addition, XenApp Reference Architecture deﬁnes distinct roles and worker groups that you can create and scale out independently. This model ﬁts nicely within AWS’s scale-out approach.