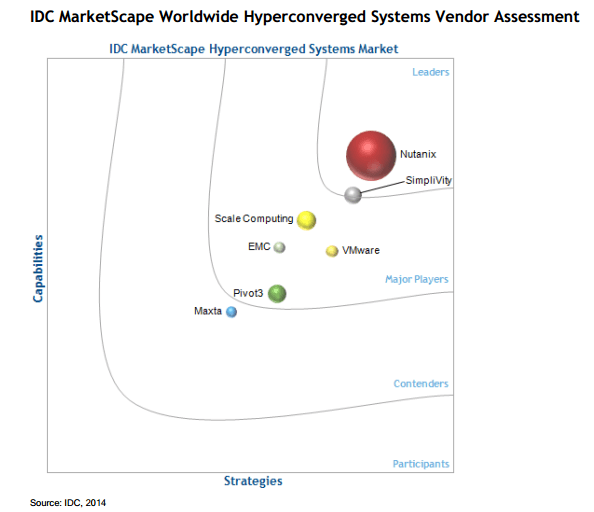 Nutanix, the web-scale converged infrastructure company, today announced that it has beennamed a leader in the inaugural IDC MarketScape: Worldwide Hyperconverged Systems 2014 Vendor Assessment. The report recognizes the prominent role that hyperconverged solutions are playing in data centers, and credits Nutanix as a key player in the development and success of the rapidly growing technology with a 52 percent share of hyperconverged revenue during the first half of 2014.

Hyperconverged systems integrate server and storage resources into easy-to-deploy appliances to reduce costs, increase flexibility and simplify IT management. According to the report, “Nutanix has been a key player in the emergence of the hyperconverged market and was early to demonstrate demand for the technology. The result has been a leading position in mindshare, as well as market share. The company generated 52 percent of all global hyperconverged revenue during the first half of 2014, and has clearly been planting the seeds for future growth.”

“Nutanix has played a critical role in identifying and capitalizing on the need for hyperconverged solutions,” said Eric Sheppard, research director, storage, IDC. “Nutanix is now taking advantage of its early success and customer knowledge to build new partnerships with key top tier OEMs and to expand the capabilities of its solutions. Such moves should help to ensure the company remains a key contributor to market growth as hyperconverged solutions enter a new phase of rapid geographic and workload expansion.”

While initial hyperconverged deployments focused on specific workloads, such as virtual desktop infrastructure (VDI), Nutanix has led the industry in the expansion of hyperconverged use cases to a broad set of demanding enterprise workloads. According to the report, “[o]ver the last 18 months, the types of workloads running on Nutanix systems have diversified from targeted or specialized workloads like VDI to Tier 1 applications and highly virtualized general business workloads like SAP, Oracle, Microsoft Exchange, SQL Server, SharePoint, Splunk, and Unified Communications (UC) Applications.”

“Our position as a leader in this IDC MarketScape is a testament to the fundamental role Nutanix has played in building and shaping the innovative hyperconverged market,” said Greg Smith, senior director of product and technical marketing, Nutanix. “Our commanding market share proves the value of bringing advanced web-scale technologies to power any enterprise workload, at any scale.”

The IDC MarketScape’s research utilizes a rigorous scoring methodology based on both qualitative and quantitative criteria to compare various companies and technologies in a given market. Placement in the hyperconverged platforms IDC MarketScape assesses market leadership based on both product strategy and business capability.