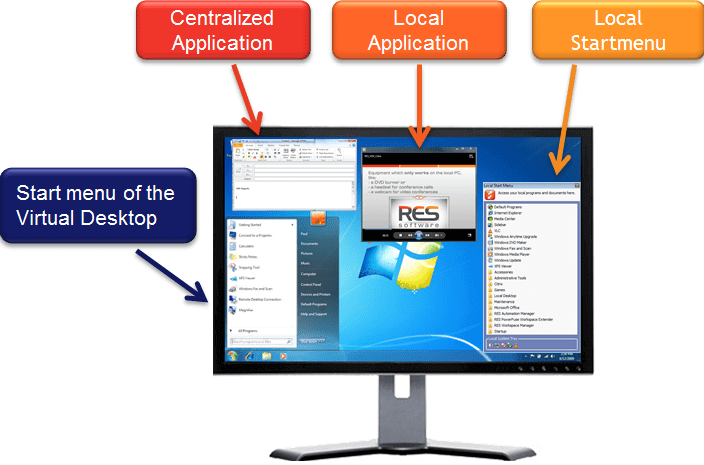 VDX provides a simple, cost-effective way to introduce Bring Your Own PC (BYOPC) models, increase VDI adoption and separate personal desktop environments from corporate environments.VDX enables user to access and run their personal and local applications seamlessly from within their virtual desktop as if they were centrally running applications. This capability makes centralized desktop environments, such as VDI or RDS, more viable for a larger group of users within organizations.

With the release of RES VDX 2014 – the latest reverse seamless Windows technology – desktop virtualization gets easier with more application support in more environments.

What is RES VDX?

The patented RES VDX technology allows local applications to be displayed seamlessly invdx overview graphic both remote and virtual desktop sessions. All this can be accessed in one single session, whereas, in the past, the two simply could not co-exist. This is especially the case with 2D/3D CAD, unified communications, and intensive financial apps.

Because applications that end users rely on are merged within a remote desktop into a single desktop, users no longer need to switch between multiple sessions. VDX allows IT to increase user productivity in virtual desktop environments and enhance users’ overall desktop experience.