Last week, in Barcelona, Citrix showed a lot of new technologies. Project Avalon, became not just yet another vision, but a clear path, with the announcement of Excalibur and Merlin releases. In between Cloud stuff, mobile applications that install on your iOS and Android devices, was a the One More Thing announcement, which we are used to that Mark T. does now…. 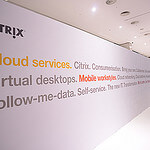 I for one thing the One More Thing announcement this time around was a big deal. I’m talking about the Cisco and Citrix announcement. The partnership, that already existed was just bumped up a notch last wekk. The expansion is within 3 areas, cloud networking, cloud orchistration and mobile workstyles. Now, why is this just not yet another partnership between to tech companies? Well, the fact that Cisco now gives up the NetScaler space is big news!
Cisco is “scrapping” the Cisco ACE product line, and going all in to the NetScaler ADC platform. Cisco announced in Barcelona,that they will no longer develop ACE, it’s pushing Citrix NetScaler as an alternative.
Why is this big news? Well, from a Citrix prespective it’s great, because Cisco shops that may not be traditional Citrix resellers, now also need to learn,support and sell the Citrix NetScaler Platform.

Without offending anybody, but Network people(not including myself, but co writer Edward is one) are not the easiest breed of IT people out there. Networking is like religion to them, it’s either this product or nothing. I know alot of Cisco techs, and they won’t touch anything else, if it’s not Cisco branded. It’s kind of like the pulmber, that won’t use IKEA stuff because they think it will break… get the picture. Now, these Cisco techs need to get into the NetScaler technology, to keep up with the mindset of Cisco (and Citrix). Brilliant move, might I say. To fully support customers during this transition phase, Citrix is offering a new ACE Migration Program(AMP) to all global customers. Learn more about the ACE Migration Program and AMPing Up For Better Cloud Services here

Cisco is also embracing the Citrix CloudPlatform, powered by Apache CloudStack, also a good thing. We might see thighter integration between Cisco stuff and Citrix stuff in the near future.

So, what would Cisco benefit from this partnership with Citrix? Apart from connecting with the best desktop virtualization platform out there at the moment, and the only one that supports all three major hypervisors on the market. Imagine for one second that Citrix CloudGateway which has huge potential and are to replace Web Interface sometime in the future, and since Cisco is all in on mobility and the consumerization part of the industry(finally), a product like CloudGateway would spread like wildefire in its partner and customer base.

On another note, I for one, was delighted with the fact that Citrix did not have any acquisitions announcements this Synergy around. Why, because I am certain that the last 2-3 years of Citrix acquisitions, need to get all the different technology together.

Now, back to Project Avalon and the Excalibur release. Good news, to see that Citrix is on board with the Windows Server 2012. Excalibur is the first release that supports Windows Server 2012. Also, the fact that the next version of “XenApp” will not longer use the IMA service, but rather go down the same road that XenDesktop did, using the FMA (FlexCast Management Architecture). FMA only supports the Controller- Worker model and therefore you need at least two controllers for high availability to kick in.

Furthermore IT can now manage their Citrix profiles and folder redirection from Studio console, including Citrix roaming and mandatory profiles. Also, Director provides real-time analytics through a context-aware dashboard to empower the help desk support and Citrix specialists to quickly root cause and resolve issues before they negatively impact end users. This means that EdgeSight, now called EdgeSight HDX is fully “backed” into the product and accessed through Director, not EdgeSight console anymore. Also, the Citrix HDX Monitor will now be a part of the EdgeSight HDX integration feature.

The Project Excalibur ( Tech Preview out 1st of November) and Merlin(q1-q2 2012 I think) TechPreview is the new way of thinking about Desktops and Apps. Combining the delivery of what we used to know as XenApp and XenDesktop. Read more here: https://blogs.citrix.com/2012/10/17/top-5-reasons-you-want-to-download-the-excalibur-tech-preview/

Stay tuned for a how to Excalibur Tech Preview guide right here on Ervik.as , where Edward Olafsen and Alexander Ervik Johnsen, will guide you to what you need to know about Citrix Project Excalibur!