ControlUp 3.0 is the Ultimate monitoring solution for Citrix and VMware

Let’s face it, if you used EdgeSight for some time, you might be pretty frustrated with all the data that it gives you. Not just that, it gives you monitoring information that you do not really need, right? Well, since EdgeSight is not getting any more development from Citrix, it’s time to look at other solutions. Smart-X has a cool product called ControlUp. ControlUp Version 3.0 was just released , it has some anticipated new features like e-mail alerts, enhanced triggers, popular Citrix metrics like ICA session latency and XenApp Load Evaluator. Smart-X ControlUp 3.0 is the latest release, and incorporates a vast number of new features.

ControlUp listens to the Community, as they also let you come with feature requests from within the ControlUp 3.0 Console. I really like this approach, as it’s usually the community that uses the products on a day by day basis. Every software company out there has something to learn from this feature! If you want to build a product, and get the right feedback, then the users of your product is a good place to start, right?

Let us start with what is probably one of the best new features in ControlUp 3.0!

Script Based Actions will allow you to give any ControlUp admin the power to dynamically add management actions into the console by importing existing VB, batch scripts or PowerShell scripts! Once you import your favorite script into the console, you can use ControlUp to quickly choose the relevant target computers, execute the script and view a detailed results screen. You can also use the powerful permission delegation feature to delegate specific SBA’s based on Active Directory groups. Think how much load you can reduce from the system team by delegating actions like ‘Restart Print Spooler’ to your helpdesk team.

Another cool aspect of this feature is the community actions – ControlUp actions that were uploaded by community members to an online library. Are made available (after they have been verified by the Smart-X team) to all ControlUp community.  You can choose between BAT/CMD, VBS or Powershell from the Script Based Actions features. 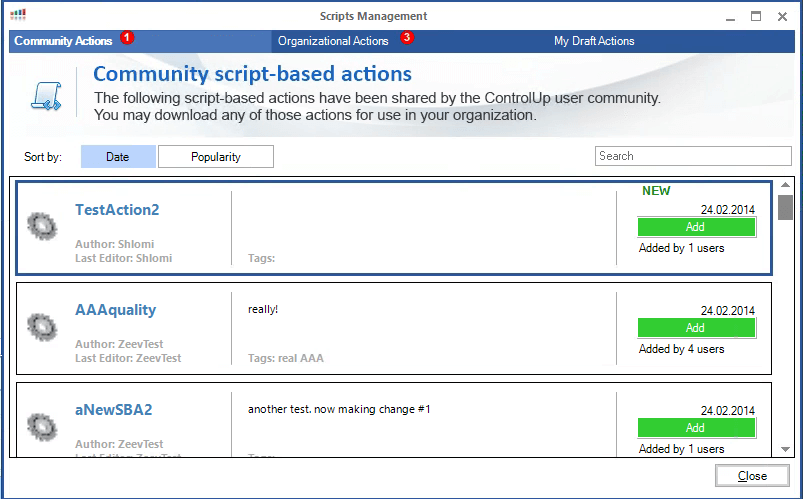 The Community scripts are ready to be added right from the console! Great feature! 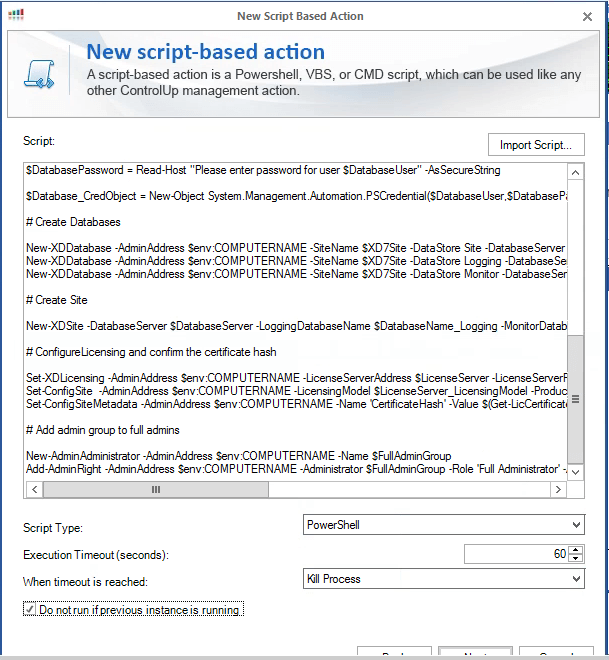 Another great feature of the SBAs is that I can import my favorite powershell scripts into the ControlUp 3.0 Console!  Like this XenDesktop script! I really see tons of use cases here! This is a feature that gives ControlUp 3.0 the flexibility that other vendors in the same spot don’t have..

ControlUp 3.0 has a new feature called triggers. Triggers allow you to monitor specific incidents in your environment, and configure follow-up actions to them. You can also configure to log the incidents to a central database for historical analysis, good for change management and SLA. ControlUp 3.0 can monitor a variety of incidents in your environment, including whenever a computer or process cross a certain stress level, Windows Events, Services and others. The follow-up actions include an e-mail alert option, so finally ControlUp admins can be notified via e-mail when important incidents occur in their environment. 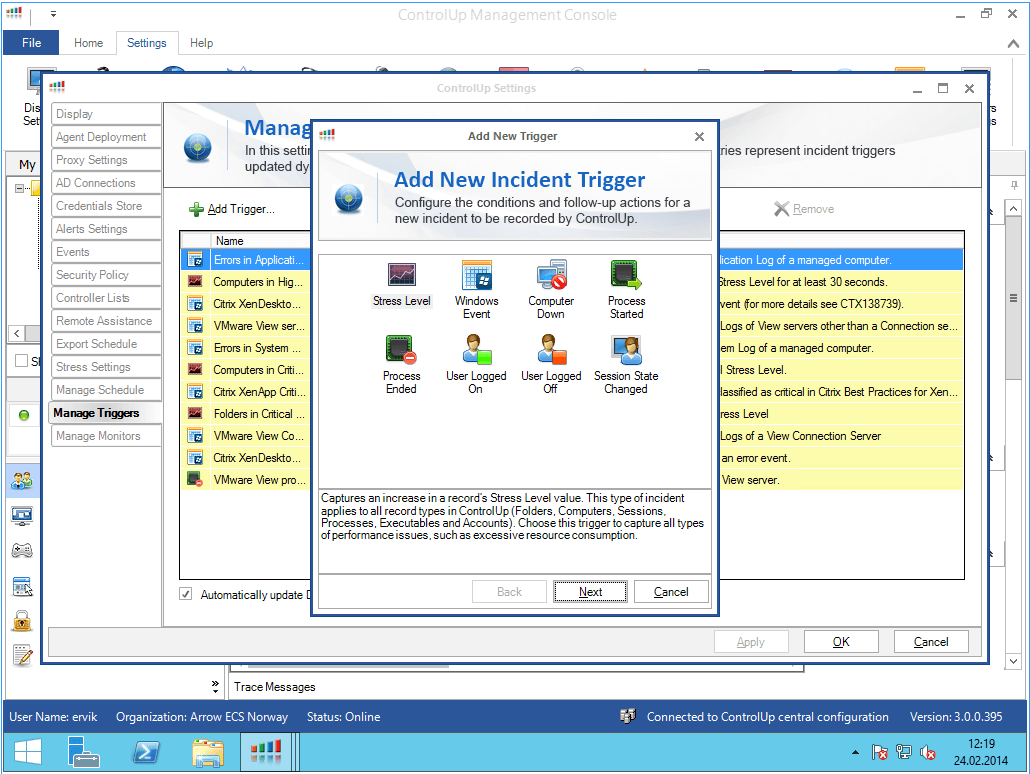 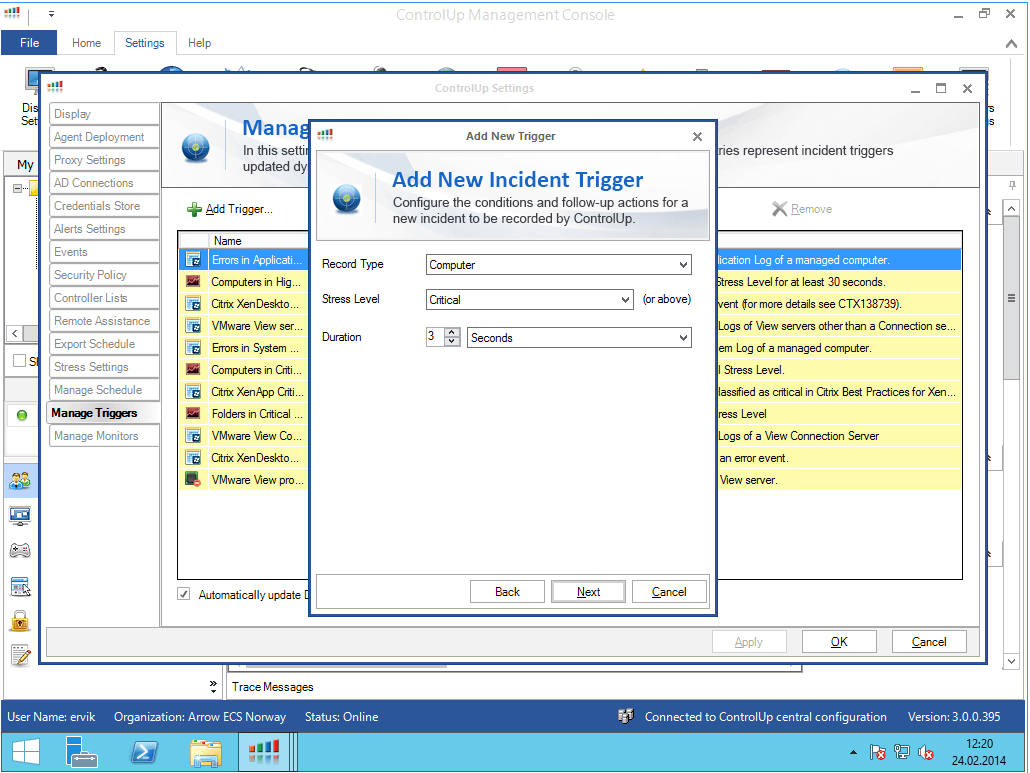 You can choose Stress level and more 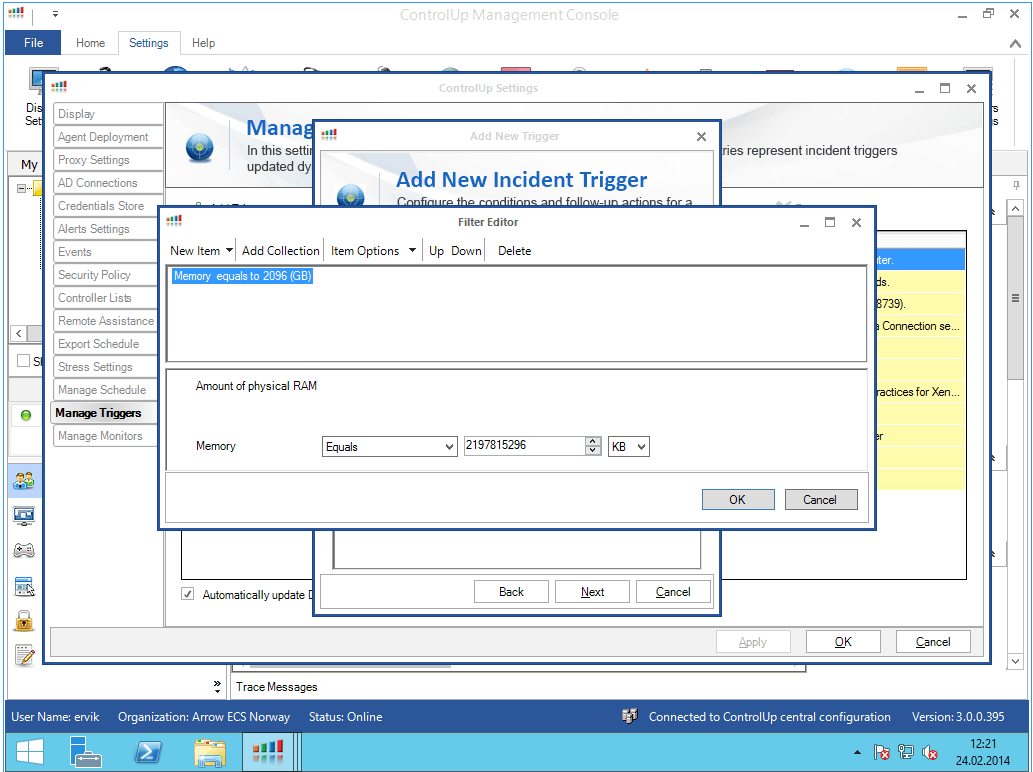 As a test I’ve made a trigger that starts when the amount of memory used reached 2GB.

You can also add Follow Up actions, such as in this case I want to get a email when that threshold is reached! I can even choose users or groups that can get these emails..and more…

So, now it will send me a trigger alert each time the amount of memory used is above 2GB via email.

Now I’ll add the trigger and give it a name.

I’ve now made a custom Incident Trigger, but as you can see of the above screenshot there is a lot of built in triggers for both Citrix XenApp and XenDesktop environments, and also for VMware View.

A good new feature that you can turn on during installation of ControlUp is Check for software updates.